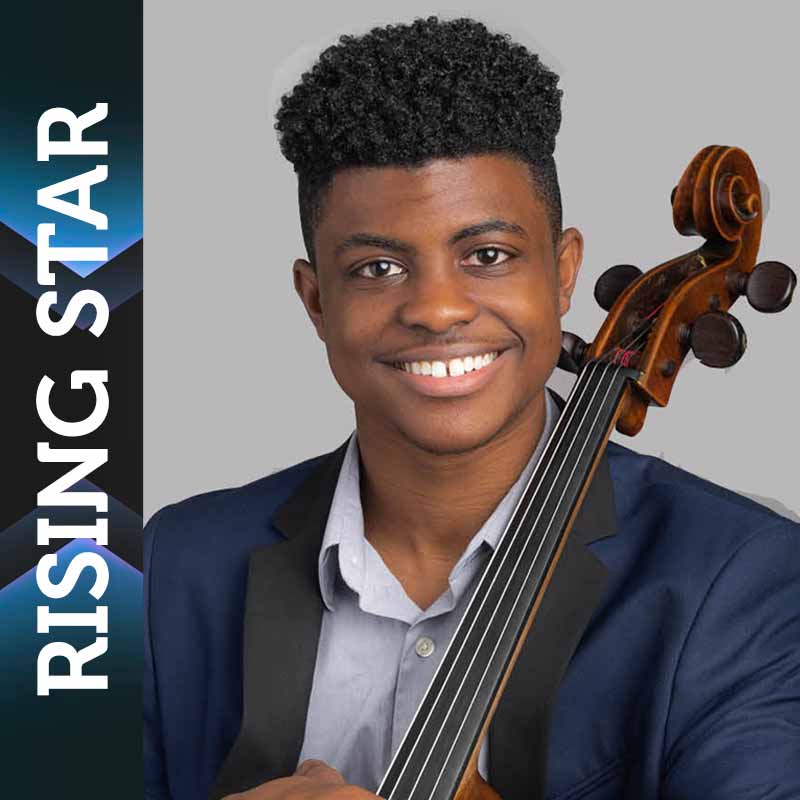 Cellist STERLING ELLIOT​ is a 2021 Avery Fisher Career Grant recipient and the winner of the Senior Division of the 2019 National Sphinx Competition.

His orchestral appearances in the 2021/2022 season include Haydn Cello Concerto No. 2 with the San Antonio, Richmond, West Virginia symphony orchestras and the Indianapolis Chamber Orchestra; the Popper Hungarian Fantasy with the Orlando Philharmonic and Hawaii Symphony Orchestra, and the Elgar Concerto with the Midland Symphony.

He will appear in a Tuesday Matinee recital at Merkin Hall at the Kaufman Music Center, Ashmont Hill Chamber Music Society, and Tuesday Musicale, as well as chamber music at Festival Mozaic and with Shai Wosner and friends for Peoples Symphony Concerts.
During the summer of 2021 Sterling debuted with the Los Angeles Philharmonic at the Hollywood Bowl performing the Tchaikovsky Rococo Variations led by Bramwell Tovey, with further appearances at Chamberfest Cleveland, and Music@Menlo.

Previous orchestral engagements have included the Philadelphia Orchestra with Yannick Nezet-Seguin, the New York Philharmonic with Jeffrey Kahane, the Boston Symphony with Thomas Wilkins, the Cleveland Orchestra, Detroit Symphony with Mei Ann Chen, the Dallas Symphony, Virginia Symphony and Buffalo Philharmonic among others.

Sterling has enjoyed a simple and humble musical journey.  As the youngest of 3 siblings, he did not want to play the cello but the violin like his older brother and sister. After a bit of encouragement, he completed The Elliott Family String Quartet by learning to play the cello at the age of three under the direction of Suzuki Cello teacher Susan Hines.

He is a two-time alum of NPR’s From the Top where he was a recipient of a scholarship from The Jack Kent Cooke Foundation and performed several concerts in Switzerland at the 2019 World Economic Forum.  He is a Young Strings of America ambassador for SHAR Strings.  In 2019, he was the first recipient of The National Arts Club’s Herman and Mary Neuman Music Scholarship Award.

Sterling Elliott is currently a Kovner Fellow at The Juilliard School where he is pursuing his Masters of Music degree studying with Joel Krosnick and Clara Kim.  He completed his undergraduate degree in cello performance at Juilliard in May 2021.