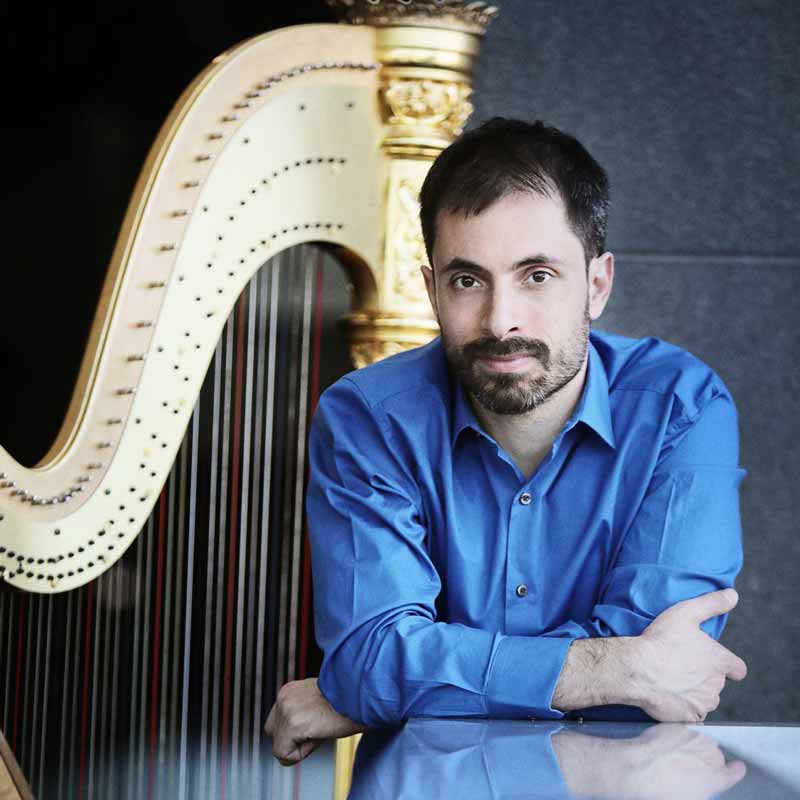 Praised by the press as “a magician” (New York’s WQXR) whose “brilliant sound and remarkable technical acumen shatter any stereotype of his instrument” (The NY Times), SIVAN MAGEN transforms the harp into an expressive, colorful and virtuosic instrument, moving it to center stage through the exploration of the standard repertoire, the commissioning of today’s composers and his new adaptations to the harp of some of the greatest music of the last three centuries. Since fall 2017 he is Principal Harpist of the Finnish Radio Symphony.

The only Israeli to have ever won the International Harp Contest in Israel, Magen is a winner of the Pro Musicis International Award and in 2012 was chosen by a committee headed by Dame Mitsuko Uchida as the winner of the Borletti-Buitoni Trust Award. He appeared as a soloist across the US, South America, Europe and Israel, in venues such as Carnegie Hall, Wigmore Hall, the Sydney Opera House and the Vienna Konzerthaus, and with orchestras such as the Israel Philharmonic, Strasbourg Philharmonic, Saint Paul Chamber Orchestra, Scottish Chamber Orchestra, Jerusalem Symphony, Sydney Symphony and the Vienna Chamber Orchestra.

Aside from his activity as a soloist, Mr Magen is an avid chamber musician and has appeared at the Marlboro, Aspen, Rosendal, Kuhmo, Delft, and Jerusalem International Chamber Music festivals, with Musicians from Marlboro, and collaborated with artists such as Nobuko Imai, Shmuel Ashkenazi, Gary Hoffman, Emmanuel Pahud, Susanna Phillips, the Danel, Calder and Dover quartets and members of the Guarneri and Juilliard Quartets.

He is a founding member of trio Tre Voci with flutist Marina Piccinini and violist Kim Kashkashian, with whom he has toured extensively in Europe and the US, and has released to great critical acclaim a CD for ECM of music by Debussy, Gubaidulina and Takemitsu. They are constantly working to expand the flute-viola-harp repertoire by commissioning arrangements and original pieces – their 2018 program included a new commission of a trio by Toshio Hosokawa which had its European premiere at London’s Wigmore Hall.

Since January 2008 Mr Magen is also a founding member of the Israeli Chamber Project, a group which performs in both outreach venues and major concert halls in Israel and the US, including the Israeli Conservatoey in Tel Aviv, the Embassy Series in Washington D.C. and Carnegie’s Weill Hall, Town Hall, Merkin Hall, Symphony Space, the Morgan Library and Bargemusic in New York City. The ICP is the winner of the 2011 Israeli Ministry of Culture Outstanding Ensemble Award. This past season, which was their 10th anniversary season, included extended tours in the west coast of the US, as well as in Canada, Europe and Israel.

Sivan Magen has released two solo albums for Linn Records, Fantasien, which includes mostly his own transcriptions of fantasies ranging from Bach to Brahms, and French Reflections, which explores connections between the French repertoire of the early 20th and of the early 21st centuries. Additionally were released to great critical acclaim a CD with the Israeli Chamber Project for Azica Records as well as an all-Britten CD Still Falls the Rain with tenor Nicholas Phan for Avie (listed in the NY Times’ “Best recordings of 2012”). His performance of Ravel’s Introduction and Allegro is featured on the Marlboro festival’s 60th Anniversary CD.

Mr Magen is also gaining a reputation as a sought-after teacher, presenting masterclasses in schools such as The Juilliard School, The Curtis Institute, The Peabody Institute, The New England Conservatory, the Paris Conservatory, London’s Royal Academy, Royal College, Guildhall School and Trinity College, as well as the summer Academy in Nice, the Kuhmo Festival Academy in Finland, and the Aspen Msuic Festival. In addition, he has been invited to serve as member of the jury of the International Harp Contest in Israel, the first Netherlands International Harp Competition, the Lyon & Healy Awards and the 2011 Vera Dulova International Harp Competition in Moscow, and served as Head of the Jury of the 2007 National Harp Contest in Taiwan. Between 2013-2017 he was a faculty member of the Brooklyn College Conservatory of Music, and in spring 2017 he was an invited professor at the Paris Conservatory.

Born in Jerusalem, Sivan Magen studied the piano with Benjamin Oren and Talma Cohen and the harp with Irena Kaganovsky-Kessler at the Jerusalem Academy for Music and Dance. After completing his military service as an “Outstanding Musician” in 2001, he continued his studies with Germaine Lorenzini in France and then joined Isabelle Moretti’s harp class at the Paris Conservatory (CNSMDP) from which he graduated with a “Premier Prix”. He has then completed a Master of Music degree as a student of Nancy Allen at the Juilliard School.