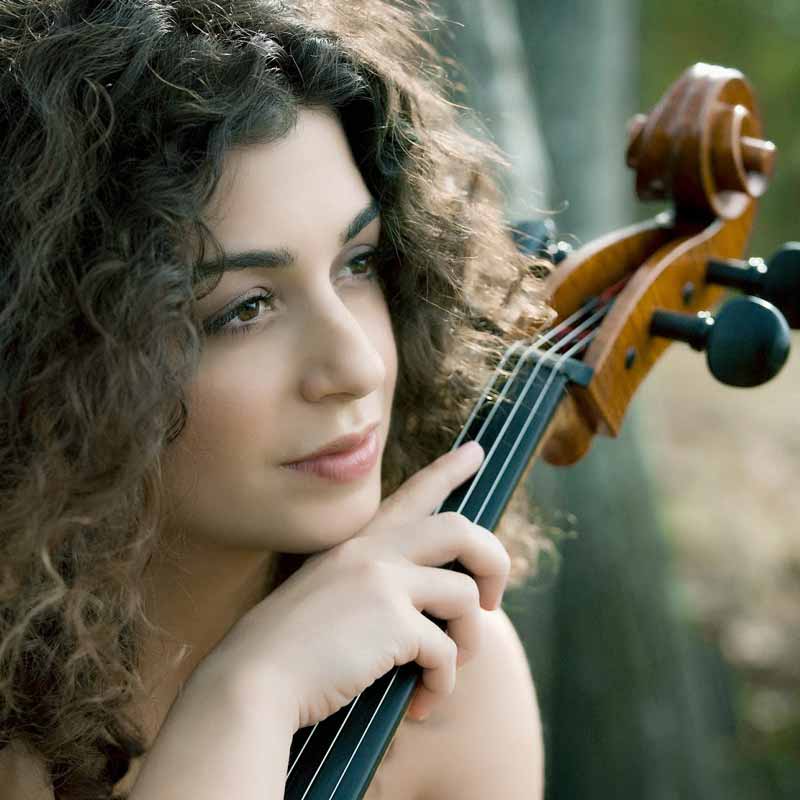 The Strad magazine describes cellist ANI AZNAVOORIAN as having “Scorchingly committed performances that wring every last drop of emotion out of the music. Her technique is well-nigh immaculate, she has a natural sense of theater, and her tone is astonishingly responsive.” Ms. Aznavoorian is in demand as a soloist and chamber musician with some of the most recognized ensembles, and she has appeared with many of the world’s leading orchestras including the Chicago Symphony Orchestra, the Boston Pops, the Tokyo Philharmonic, the Helsinki Philharmonic, the Finnish Radio Symphony, the International Sejong Soloists, the Belgrade Philharmonic, the Juilliard Orchestra, and the Edmonton Symphony. This season marks Ms. Aznavoorian’s thirteenth year as Principal Cellist with Camerata Pacifica.

Ms. Aznavoorian received the prestigious Bunkamura Orchard Hall Award for her outstanding cello playing and artistry. Some of her other awards include first prizes in the Illinois Young Performers Competition (televised live on PBS with the Chicago Symphony), the Chicago Cello Society National Competition, the Julius Stulberg Competition, and the American String Teachers Association Competition. She was a top prizewinner in the 1996 International Paulo Competition, held in Helsinki, Finland. As a recipient of the Level I Award in the National Foundation for the Arts Recognition and Talent Search, Ms. Aznavoorian was named a Presidential Scholar in the Arts and performed as soloist at the Kennedy Center in Washington, D.C. where she met former U.S. President Bill Clinton.

As a first-year student at The Juilliard School, Ms. Aznavoorian won first prize in the institution’s concerto competition—the youngest cellist in the history of the school’s cello competitions to do so. As a result, she performed with the Juilliard Orchestra in a concert with conductor Gerard Schwarz at Avery Fisher Hall. With only 12 hours notice, Ms. Aznavoorian stepped in to replace Natalia Gutman in three performances of the Shostakovich Cello Concerto No. 1 with the San Jose Symphony—concerts that were hailed by the San Jose Press. Other notable appearances include concerts at Weill Hall and Zankel Hall at Carnegie Hall, Alice Tully Hall, Ravinia’s Bennett Hall, Aspen’s Harris Hall, the Dame Myra Hess Memorial Concert Series, WFMT Live from Studio 1, and NPR’s Performance Today. She has been a member of the renowned string ensemble the International Sejong Soloists, and also performs frequently on the Jupiter Chamber Music series in New York. Ms. Aznavoorian received both her Bachelor and Master of Music degrees from the Juilliard School where she studied with Aldo Parisot.

In addition to performing, teaching plays an important part in Ms. Aznavoorian’s career. She has been a member of the distinguished music faculty at the University of Illinois in Champaign/Urbana, and in the summers has served on the faculty of the Great Mountains Music Festival in South Korea. Ms. Aznavoorian enjoys performing new music and has made the world premiers of many important pieces in the cello repertoire. Some of these include Ezra Laderman’s Concerto No. 2 with the Colorado Springs Philharmonic under the baton of Lawrence Leighton Smith, Lera Auerbach’s 24 Preludes for Cello and Piano on stage at the Hamburg Staatsoper with the Hamburg State Ballet—choreographed by John Neumeier, and Lera Auerbach’s Dreammusik for Cello and Chamber Orchestra, which was written for her and commissioned by Camerata Pacifica and Sandra Svoboda. In addition to return engagements at chamber music festivals around the globe, the 2017-2018 season included a debut concert tour of Armenia, the country of her ancestors.

Ms. Aznavoorian records for Cedille Records, and she proudly performs on a cello made by her father Peter Aznavoorian in Chicago.