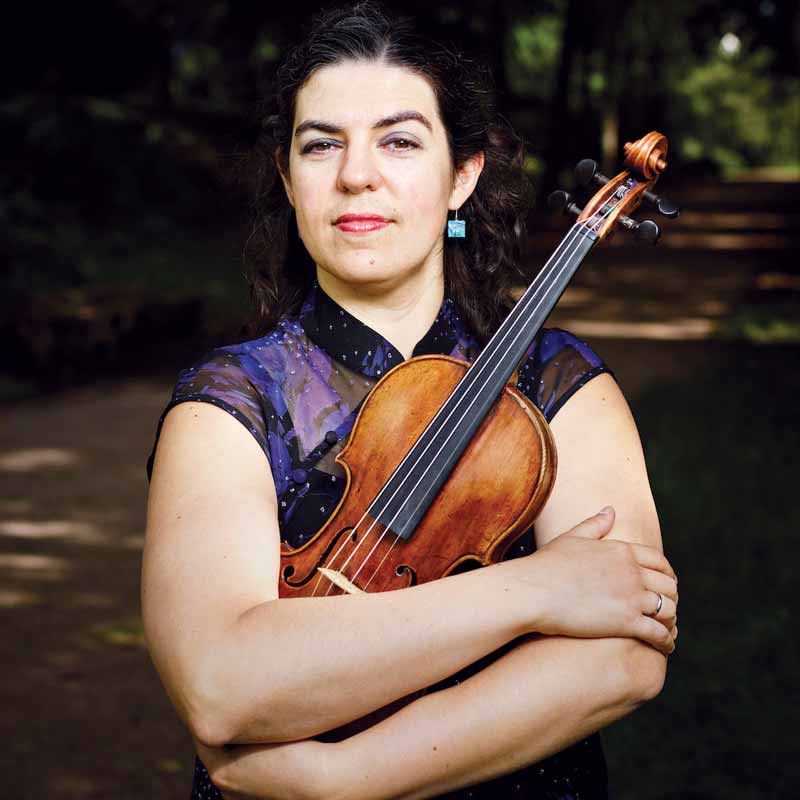 SARAH KAPUSTIN’S musical activities have taken her across North and South America, Europe, Asia and Australia in performances as soloist, chamber and orchestral musician. Born in Milwaukee, WI, she has performed with such orchestras as the Milwaukee Symphony Orchestra, Juilliard Symphony, Pasadena Symphony, Vogtland Philharmonie and the Pro Arte Orchestra of Hong Kong. Sarah has received prizes and honors in numerous competitions, including 1st prize of the International Instrumental Competition in Markneukirchen, resulting in solo appearances throughout Germany. She has appeared in such prestigious concert venues as Carnegie Hall, Alice Tully Hall, Cité de la Musique in Paris, the Concertgebouw in Amsterdam, Mexico City’s Sala Nezahualcoyotl, Hong Kong Cultural Centre, and Capella State Hall in St.Petersburg.

A devoted and passionate chamber musician, Sarah has appeared at various international festivals, most notably the Kuhmo Chamber Music Festival (Finland), Musique de Chambre à Giverny (France), Sitka Summer Music Festival (AK), El Paso ProMusica (TX), Peter de Grote Festival (Netherlands) and the Marlboro Music Festival (VT) where she has performed with such distinguished artists as Claude Frank, Joseph Silverstein, David Soyer, and Kim Kashkashian. She shows great interest in contemporary music, and has had the honor to work with several composers on their own compositions, including Henri Dutilleux, Kryzstof Penderecki, Jörg Widmann, Ned Rorem and Joey Roukens. Sarah plays recitals regularly with pianists Jeannette Koekkoek and Shuann Chai, and her recordings of the Beethoven sonata cycle (with Koekkoek) and solo works by Bartók, Bach and Fulmer, among others, have received international acclaim. Sarah was the 1st violinist of the renowned Rubens Quartet from 2008 until the group’s final season in 2016.

Sarah received a Masters degree in violin performance at The Juilliard School with Robert Mann in 2005. She previously received a Bachelor of Music and an Artist Diploma from Indiana University as a pupil of Mauricio Fuks, and formerly studied with Mimi Zweig and James Przygocki at the String Academy of Wisconsin. She has participated in masterclasses with Joshua Bell, Midori, Leonidas Kavakos, Mihaela Martin and Ruggiero Ricci, among others. After receiving a Fulbright Scholarship, Sarah spent 2006 to 2008 in Paris as a student at the Conservatoire National Supérieur de Musique, studying chamber music with Michel Strauss and Vladimir Mendelssohn as member of the Trio Archiduc. She also served as concertmaster of the Orchestre des Lauréats du Conservatoire during the 2007-08 season.

Currently Sarah resides in Zwolle, the Netherlands, where she is active as a chamber musician and soloist. From 2017 to 2019 she played in the Noord Nederlands Orkest (Groningen) as first concertmaster. She also performs and tours regularly with the Orpheus Chamber Orchestra, Amsterdam Sinfonietta and the Chamber Orchestra of Europe. Increasingly sought after as a teacher, she has been professor of violin at the ArtEZ Conservatorium in Zwolle since 2011, professor of chamber music at the Prins Claus Conservatorium in Groningen since 2014, and in 2017 she joined the faculty of the Sweelinck Academie (preparatory division of the Amsterdam Conservatory). She has given masterclasses in the US, the Netherlands, France, Spain, Brazil, Columbia and Hong Kong, and is a faculty member of the Indiana University Summer String Academy.

Sarah plays on the ”Nico Richter and Hetta Rester” G.B. Rogeri, Brescia, ca. 1690, on loan to her from the Nationaal Muziekinstrumentenfonds in Amsterdam.